The very heart of the Remoting SDK is based on Channels, Messages, Envelopes and Services. Two more components used under the hood are Interfaces and Invokers.
Don't be afraid of these words, things are actually simpler than they look. Most steps of the data exchange process are hidden from the developer. Of course they can be accessed and fine-tuned if needed yet most scenarios don't require developer to do that.

Let's take a look at the 'Client calls the server' scenario:

Here's what happens from the Remoting SDK's point of view:

The client code calls method of some object serviceProxy. Here, serviceProxy is an instance of the auto-generated proxy class, so calling the serviceProxy.DoSomething() method actually means the following: 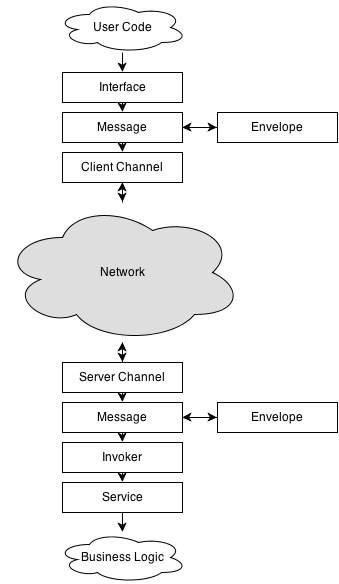 The magic is that the entire process is transparent for the user code on both ends of the wire and doesn't require much attention from the developer. While the service method call pipeline might seem complicated, its performance overhead is negligible (especially for the binary serialization-based Message), making the actual network speed the main issue to care about, not the inner Remoting SDK processes.